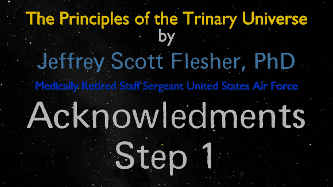 Sir Isaac Newton acknowledged that he stood on the Shoulder of Giants so he could see further, so we Stood on the Shoulders of Tycho Brahe who believed God made the Planets move, Johannes Kepler who believed in the Harmony of the Universe, Galileo Galilei who helped us see the Heavens more clearly, Michelangelo and Da Vinci who saw the World of Imagery, Nikola Tesla who said we are Light Beings, Isaac Asimov who wrote Science Fiction based on Albert Einstein: who proved the Universe can not exist without God unless it has Paradox's that can not exist in Reality, George Washington, Thomas Jefferson and Benjamin Franklin for fighting for Freedom and Abraham Lincoln for taking it away without anyone missing it, Mark Twain for learning how to write in a way others could relate, Wolfgang Amadeus Mozart, Ludwig Van Beethoven and Richard Strauss for helping the World to Listen. I also must Acknowledge that all of these Men had Autism and like myself, it's in the Autistic Spectrum called High Functioning, also known as Aspies to acknowledge Doctor Hans Asperger who also had it and for which Asperger's Syndrome was named after, I was born with it, I inherited it from my Family line which can be traced back Hundreds of years to my 5th Great Cousin Isaac Newton Flesher, and he was also an Ashkenazi who are known to be the most Intelligent race on the Planet. Autism allows the Brain to work in a very Different way then those called Neurotypicals, those like myself who have been tested with High IQ's, might think in terms of Images instead of Words, so its hard for some of us to convert Images into Words, and I know that I write run on sentences, it's because I can not think any other way, so I cannot write any other way and be able to understand it, one thought leads to another, seemingly unrelated thoughts become mixed together, so you must Acknowledge that before grading me on English or Concepts, because words are Spells, sometimes I use the wrong word by mistake, others on purpose, but so did all these men, and where would the World be without them today is something everyone must Acknowledge. The Bible said God is all Light and Aspies have a Tendency to take things literally, so the word God and Light mean the same thing to me, in fact that is what I set out to prove, but without Religion, only Science, because none of these men believed in a Deity, these were all men of Science.