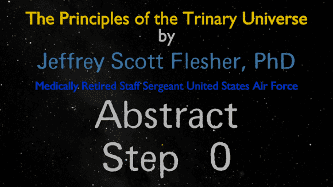 The Universe is defined by the way we imagine it works at the subatomic level, so in the Dynamic Universe when you turn on a Flashlight you view the photon as instantaneously accelerating to the Speed of Light, it has a little mass so its shot out like a bullet from a Railgun or Atomic Accelerator, so Newtons Law of Motion applies, so for every action there is an equal and opposite reaction, yet a flashlight is not built like a Railgun and there is not enough recoil to account for its mass, and because its viewed as being caused by a disproven theory about a curvature in Space and Time, so this is a major problem with this Theory, not to mention the Paradox's this theory causes, and it does not explain how Electricity which is Light at a different Frequency, can travel without a medium or conductor in thin air or the vacuum of Space, so the Trinary Universe works different, at the subatomic level of Space it has 4 Dimensions numbered from 0 to 3, in empty space you can see a phenomenon called White Noise, I call it Trinary Energy, just like Atoms, this White Noise has a pattern of changing between 3 States and follows every Atom in the Universe as it changes states from a Light State which we see the Atom or Photon under a Microscope, we assign it the value of 1, it is in the 3rd dimension, so we call it Matter or the Father, then it changes to a Dark State and can move as it shifts out of the 3rd dimension into the 1st or 2nd dimensions, so we give it a value of -1 and call it Antimatter and because it moves away from the Matter we can call it the Son, then the Atom disappears because it shifted into the 0 Dimension I call Null Space, so we call it the Holy Ghost, mathematically we have 1 + (-1) = 0, this is what Newton referred to as Trinity or the Father, Son and Holy Ghost, so Energy is Static, it does not move, it's the Flashlight that moves through the Universe, as it moves through the Dimensions of space, so this is totally different from the Dynamic Universe, because the Energy is being pulled from the Flashlight and not shot or pushed, the first Photon never moves in the Universe, its static, so its more like a fishing line, imagine the flashlight is the fishing pole and its hook is connected to the fabric of the Universe which never moves so when you turn it on, the line or Light comes out as the flashlight moves through the Universe at the Speed of Light, so the Light has a Medium or Conductor to travel on, the White Noise I call Trinary Energy.