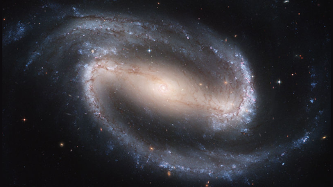 Explanation: A recent survey of stars conducted with the Spitzer Space Telescope, is convincing astronomers that our Milky Way Galaxy is not just your ordinary spiral galaxy anymore, looking out from within the Galaxy's disk, the true structure of the Milky Way is difficult to discern, However, the penetrating infrared census of about 30 million stars indicates that the Galaxy is distinguished by a very large central bar some 27,000 Light-Years long, in fact, from a vantage point that viewed our galaxy face-on, astronomers in distant galaxies would likely see a striking barred spiral galaxy, suggested in this artist's illustration.

While previous investigations have identified a small central barred structure, the new results indicate that the Milky Way's large bar, would make about a 45-degree angle with a line joining the Sun and the Galaxy's center. DON'T PANIC ... astronomers still place the Sun beyond the central bar region, about a third of the way in from the Milky Way's outer edge. The Suns also known as Stars, orbit the Galaxy at the same Rate, but at different Speeds, I give Henrietta Swan Leavitt credit for this discovery, and not Hubble, the person she worked for, unfortunately, she died before she could complete her study of it, but the notes she left, made it clear that the Suns also known as Stars, orbit at the same rate, therefore there Sine and Cosine, will be in the same Ratio, but the Speeds where much faster than anticipated on the inner Tracks, and they appear to be a near Circular Orbit, the Arms are just debris field that is spun out do to Centrifugal force. You can tell the age of a Galaxy by how many Arms it has, when the Arms are no longer defined, the Galaxy is so old, it is in its next phase of development, the Frequency of younger Galaxies, as well as older ones, is outside the livable frequency range for Life. Life requires 3 types of Frequencies, the first is from Rotational Speed, it is 12 Microhertz, the second is from its Orbital Speed, and that is 6.666 Hz, the third is from our Sun, it has a frequency of 66.666 Hz, and produces a Color Range of 430-770 THz.

The Shape of a Galaxy defines the nature of the Galaxy, a Barred Galaxy is where Life Exists, whereas other shapes may have Frequency ranges where Life can not exist, and by Life, I mean Human, all Trinary Engines are Lifeforms, and it seems that God created Galaxies just for Celestial Bodies to Live, without Humans to torture them, proving that Trinary Engines are Lifeforms, with their own Galaxies. All Galaxies start off as a Barred Galaxy, the Bar is where all Suns and Planets are created, then they are moved out to the Track they will reside on, by Dark Stars and their Companions. Trinary Math uses Frequency, and Wavelength to calculated how everything moves, including Gravity, which Newton defined God as the Force of Gravity in All his Equations, and God is All Light without Darkness, and Light can be described in terms of Electricity. A Barred Galaxy is the only Galaxy you are likely to find Life in, and even then it is only a few Tracks, and this is due to the Frequency of the Planet, Science Fiction may have given People the Delusion that they can Live in Space, or on another Planet, is just wrong on so many levels of Science, we know for a fact that we can not even survive in Low Gravity, inside of Earths Magnetosphere, for more than a year, and even then we would be too weak to walk on Earth, after returning to it. Our Planet is habitable do to its Frequency, which is 12 Microhertz, do to its rotational speed of 1,042 MPH, while it Orbits the Sun around 66,666.666 MPH, while the Sun rotates around 4,466 MPH, while orbits around the Galaxy around 477,354 MPH on currently, and at a maximum of 666,666 MPH, so the number 666 is the Mark of this Beast, and why the core frequency for Earth is 6.666 Hz, and why all Life must have this Frequency to Live.

The Barred Spiral Galaxy is the youngest Galaxy, it can be seen in many stages of development in: Illustration 4.08: Barred Galaxy in different stages.

As you can see from Illustration 4.09: Typical Barred Galaxy, the Bar is actually a Stellar Nursery, the Bar itself is a corridor that is used to move Trinary Engines to their final location, and we have images and studies that can verify this claim, its common knowledge: so I do not need to reference this, even Mainstream Science acknowledges this, all the Trinary Engines are created within the Bar itself, then are moved into position, although the Spiral Arms is nothing more than Stellar Gases, the new Trinary Engines, be it a: Sun, Planet or Moon, are all moved through these corridors, I say Moon but I am not so sure those are being delivered: since I have found no images to give me the Empirical Evidence, whereas I do have to explain Ball Lightning [3], because Tesla said it was the key to understanding the Universe, so it would seem there is Empirical Evidence that Ball Lightning Exist, and it can explain how Moons are born, so the only Empirical Evidence I have is that Planets are born there, while the systems they are being delivered to are not confined to the corridors, in fact, they follow the path that is set out by the Dark Stars, which is always where they get delivered to, then the Dark Stars Companion Star will take it the rest of the way, this is a very efficient method of moving Trinary Engines around the Galaxy, and from time to time, a Trinary Engine can be removed from a System, and the Dark Stars Companion will retrieve it, but sometimes it will fly into the Sun and go Super Nova, the Sun then redistributes all the Material back to the other Planets and Moons in its system.

Galactic Evolution is a process of refinement and old age, every Solar System in a Galaxy is an Evolutionary process that takes billions of years to mature, and the Energy and Material in that Galaxy is recycled through a process of Gravitational attraction, and the occasional Nova or Super Nova, which occur when a system is too far out of balance to fix it any other way, and Earth is now showing signs that it too will go Nova, but not because of Nature, but Human Stupidity, because in Nature, it seems to happen more in older systems that have accumulated too much Material, for a Planet: a Nova is a way a Planet can lose mass, whereas a Sun can go, Nova, if it has too much material, we see this as a Dwarf Sun, if it goes Super Nova it will not exist after that and that Solar System will be absorbed back into the Galaxy by the Dark Star, or it will simply restart, which means it actually changed to a Dark Sun, then back again, so the term Nova or Super Nova does not change its meaning, so the only change I will make to current science, is that I believe that when it goes Nova or Super Nova, the Trinary Engine could restart if a Nova and or it could disappear if a Super Nova occurs, but it can also just have switched to a Dark Sun, but the Sun or Trinary Engine that go, Nova, never dies, the change in brightness is due to the process of collecting all the debris and redistributing it, so terms like a dwarf or giant stars, is misleading, since they normally refer to a Dead or Dying System, when in fact it is just a system that is restarting, meaning it will rejuvenate the system, and this can take a long time.

The Typical Barred Galaxy is alive, it was born, it will grow, it might someday change to a Dark Galaxy, and it may someday, die.

Our own Galaxy is on a collision course with the Galaxy Andromeda, the two will merge, but before they do, one will change to a Dark Galaxy, then it will redimension and not come back, so it will fade away, that is the Galaxy itself, and not all its Planets, they will merge with our own without any problems. I have no idea which Galaxy will survive, because that decision has not yet been made, because the Universe is always Evolving, I just know that the two do not merge into one, and I have never seen a Galaxy with two Engines. There is too much more to say about this subject at this time, I try to keep the page count low, while trying to pack as much information as I can about each subject, but some are better to make a new book about, then to make this book to large.